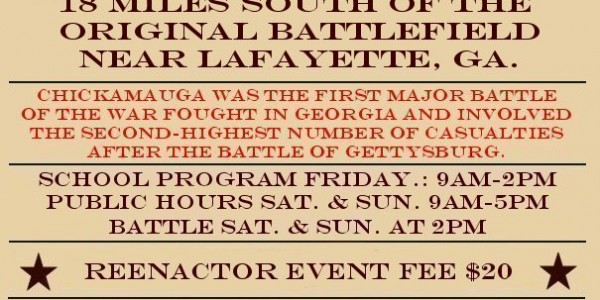 Join us as we pay tribute to the brave soldiers who fought in The Battle of Chickamauga, one of the most significant and bloody engagements of the American Civil War. Through reenactments, exhibits, and interactive displays, you can experience the sights, sounds, and emotions of this tumultuous time in history. Learn about the strategies and tactics of the Union and Confederate armies, and get a glimpse into the daily lives of the soldiers who fought in this epic conflict. Don't miss this opportunity to connect with and honor the history of The Battle of Chickamauga.

The Battle of Chickamauga was a major engagement of the American Civil War fought on September 19-20, 1863, in the area around Chickamauga Creek in northwest Georgia. It was a Confederate victory, with the Southern army defeating the Union forces and driving them back. The battle was the culmination of a campaign in which Confederate General Braxton Bragg sought to drive the Union army out of Tennessee and capture the city of Chattanooga. The fighting was fierce and resulted in heavy casualties on both sides, with over 34,000 total soldiers killed, wounded, or captured. The Union army retreated to Chattanooga after the battle, and the Confederates besieged the city in the following weeks. The Battle of Chickamauga was a significant victory for the Confederacy, but it ultimately failed to achieve its strategic objectives.