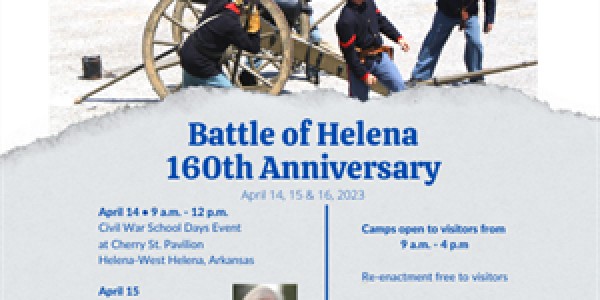 The Delta Cultural Center is hosting the 160th Anniversary Reenactment of the Battle of Helena from April 14-16, 2023. On the first day, there will be a Civil War School Days Event at the Cherry Street Pavilion in Helena from 9 a.m. to 12 p.m. The battle reenactments will take place on April 15 at 2 p.m. and April 16 at 1 p.m. Visitors are welcome to visit the camps from 9 a.m. to 4 p.m. and the event is free for all visitors.

The Battle of Helena was a military engagement that took place during the American Civil War on July 4, 1863 in Helena, Arkansas. It was fought between Union forces, led by Major General Benjamin Prentiss, and Confederate forces, led by Major General Sterling Price. The Union forces were able to repel the Confederate attack and emerge as the victors of the battle. The battle was a significant Union victory as it helped to secure control of the Mississippi River and disrupt Confederate supply lines.