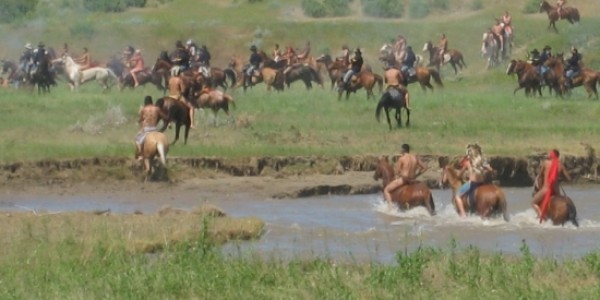 Discover the historic struggle for control of the West through the Little Bighorn Reenactment. Visit the site where the Sioux Nation was encamped and witness history come to life. This is a unique opportunity to learn about and experience an important moment in American history firsthand.

The Battle of Little Bighorn, also known as the Battle of the Little Bighorn, the Battle of the Greasy Grass, and Custer's Last Stand, was a significant conflict in the Great Sioux War of 1876. It took place on June 25 and 26, 1876, near the Little Bighorn River in Montana Territory. The battle was fought between a group of Lakota Sioux, Northern Cheyenne, and Arapaho warriors and the 7th Cavalry Regiment of the United States Army. The Native American warriors were led by Chief Crazy Horse, Chief Gall, and Chief Sitting Bull, while the 7th Cavalry was led by Lieutenant Colonel George Armstrong Custer.

The battle ended in a decisive victory for the Native American forces, and Custer and all of his men were killed. The Battle of Little Bighorn is one of the most famous battles in American history and is often referred to as a symbol of the defeat of the U.S. Army by Native American warriors.