All places and events for tag: English Civil War

The Making of Englishness: Civil War

Step back to the 17th Century whilst you wander through The Wardour Garrison’s encampment. Read more 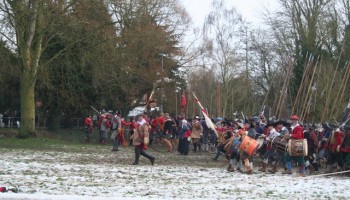 For over 40 years the faithful troops of The Sealed Knot have gathered in the historic town of Nantwich, Cheshire to re-enact the battle that took place in 1644. Read more